Earlier this year, K-Line decided to bring the Alberta Operations into the Integrated Management System (IMS) and be audited with the Ontario and Saskatchewan Operations for Registration. The Alberta Registration Audit was held the week of October 11th, 2013 and the auditors have “Recommended for Certification” the management system to ISO 9001 and OHSAS 18001. This audit makes K-Line three … END_OF_DOCUMENT_TOKEN_TO_BE_REPLACED

Following a long journey over the past few years, K-Line is pleased to announce that the Saskatchewan Divisions were successful in being “Recommended for Certification” following the Registration Audit held September 23-25th, 2013. The auditor’s reports and assessments are reviewed by the registrar and we should hear soon when the K-Line Management System has been registered to the ISO 9001 … END_OF_DOCUMENT_TOKEN_TO_BE_REPLACED

In 2012, K-Line was featured in IHSA’s Annual Report due to our achievement in earning several awards. As stated in the report, “K-Line receives COR, ZeroQuest, and a President’s Award” during the 2012 IHSA Annual General Meeting. The ZeroQuest award was received in recognition of earning the Sustainability Level, the highest level, of the program. The President’s Award was received … END_OF_DOCUMENT_TOKEN_TO_BE_REPLACED

The New 2014 Health & Safety, Quality, and the Respect in Our Workplaces Policy Statements have arrived. One major change this year is the addition of a newly developed Environmental Policy Statement. Previously, K-Line had an “Environment Policy”, which has been enhanced and improved to a similar level of the other major corporate policies. In 2013, the Environment was included … END_OF_DOCUMENT_TOKEN_TO_BE_REPLACED

The 2013 Electricity Human Resources Canada Conference is the national conference dedicated to the electricity and renewable energy industry workforce. This two day national conference will bring business leaders and human resource professionals together. Attended by employers, labour, education, and government representatives working for and with the sector. The aim of the conference is to connect, convene and inspire the … END_OF_DOCUMENT_TOKEN_TO_BE_REPLACED

The Ontario Divisions of K-Line and K-Tek have been certified to both the ISO 9001 (Quality Management) and OHSAS 18001 (Health and Safety Management) Standards. As was highlighted during the Annual General Meetings (AGMs), having these certifications demonstrates that we meet a high level of safety and quality, and that the organization has a system in place to manage these … END_OF_DOCUMENT_TOKEN_TO_BE_REPLACED

Pictured above: Scott Kress, K-Line’s 2013 AGM Keynote Presenter. Think of all the ways K-Line leads the way: in Quality, Health and Safety, Human Capital, and Operations- and you will get a good sense of the theme of the recent 2013 K-Line Annual General Meetings. In Ontario, Saskatchewan and Alberta K-Line is Leading the Way and setting our organization apart, … END_OF_DOCUMENT_TOKEN_TO_BE_REPLACED

In 2012, the Centre for Management Development (CMD) at the University of Regina administered a Saskatchewan-wide safety culture research project to businesses operating in Saskatchewan. K-Line participated in this research project for all divisions across Canada and will participate again in 2013. An article was recently published in the Saskatchewan Business Magazine featuring the benefits of the survey and highlighting … END_OF_DOCUMENT_TOKEN_TO_BE_REPLACED

A safety message of energy, enthusiasm, and innovation was front and centre in Vulcan, Alberta on Tuesday April 30th when Safety Champion Rob Ellis motivated and inspired over 300 students. Rob Ellis (K-Line’s AGM keynote presenter in 2011) was joined by representatives from K-Line, DuPont Canada, and Fortis Alberta. 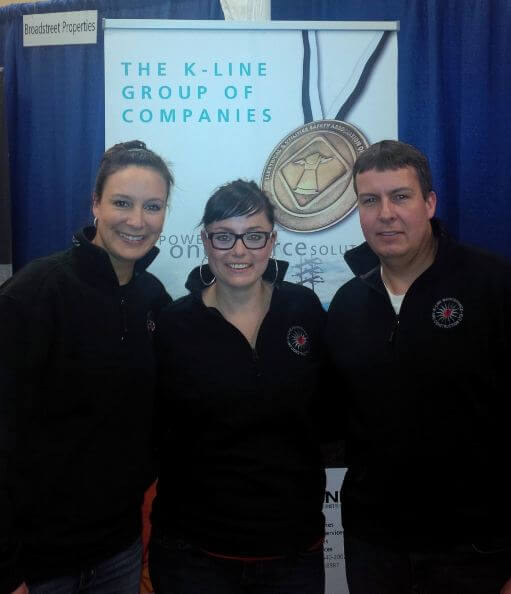 On April 4th, 2013, K-Line attended the ReginaJobShop Spring Career Fair in Saskatchewan. K-Line’s booth at the fair featured our many services and areas of employment. With a video of our last AGM playing in the background, our booth was frequently visited by interested candidates. With over 400 participants attending, and media coverage by a local radio station and Global … END_OF_DOCUMENT_TOKEN_TO_BE_REPLACED